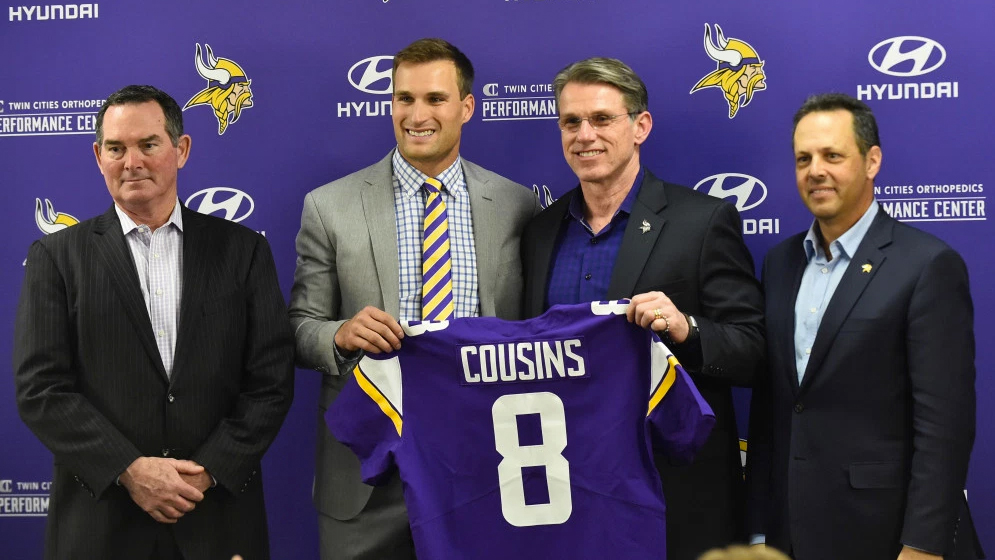 Kirk Cousins is a Minnesota Viking.

Cousins was deemed by NFL.com as the top player available in this year’s free agency class.

After six seasons with Washington, including the past two under the franchise tag, the 2012 fourth-round pick hit the NFL market for the first time on Wednesday when 2017 contracts expired and the new league year began.

Cousins arrived in the Twin Cities on Wednesday evening, stepping off the jet with a child carrier in hand. He was joined by his wife, Julie, and their son.

The former Michigan State Spartan is one of six quarterbacks to start all 48 games with the same team in the past three seasons, and he helped Washington score 56 points in two games against Minnesota in the past two regular seasons.

Cousins was a combined 48-of-78 passing (61.5 percent) for 589 yards with three passing touchdowns, an interception and passer rating of 92.3 against a stingy Vikings defense. He also scored two of the nine rushing touchdowns against Minnesota in 2017.

Cousins will be joining a Vikings team that has won the NFC North in two of the past three seasons and made an appearance in the NFC Championship in January. He will team with receivers Adam Thielen and Stefon Diggs and tight end Kyle Rudolph, who were the top three targets in 2017.

Minnesota also made significant improvements in its rush attack from 2016 to 2017 despite losing rookie phenom Dalvin Cook to a torn ACL last October. Cook is progressing in his rehab.

The Vikings entered the 2018 offseason in a unique situation with quarterbacks Sam Bradford, Teddy Bridgewater and Case Keenum all having contracts that expired Wednesday.